Vientiane is the capital city of Laos, located in the Vientiane prefecture. The capital itself has a history that dates back to around 1.000 AD, because of the fertility of the surrounding area, but was not a capital until halfway through the 16th century. The city is filled with temples from different era's that all have something unique to offer, museums, and monuments. In the surrounding vicinity, the famous Buddha park, Wat Xien Khuang,a peculiar sight and Phou Khao Khouay National Park with a large variety of biodiversity are the most interesting visits while in the area. 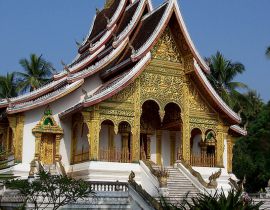 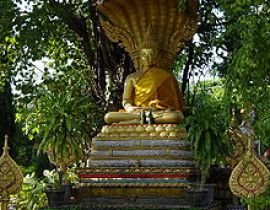 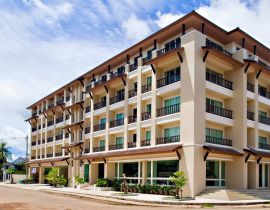 Located in the heart of laid-back Vientiane, minutes from the Mekong River and surrounded by an... 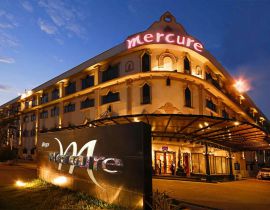 Mercure Vientiane features an outdoor pool, tennis court and accommodation with a satellite... 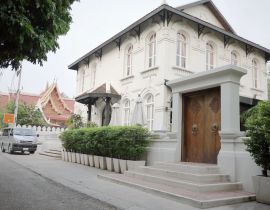 Ansara Hotel is a 3-minute walk from Mekong River and Wat Chan. It offers modern air-conditioned... 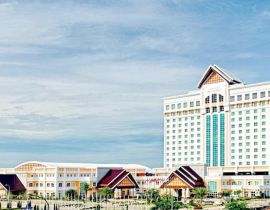 Don Chan Palace is located along the Mekong River, 1 km from Talat Sao Shopping Mall. This... 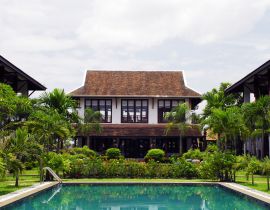 The Lao people’s Democratic Republic, with an estimated population of 6.9 million is the only landlocked country in the heart of the Indochina Peninsula in Southeast Asia. To the north lies China, to the east, Vietnam, south of the country Cambodia and to the west, Thailand and Myanmar. The capital of Laos is Vientiane that mixes French-colonial architecture with various Buddhist temples. After two decades of isolation due to the colonial domination, inside conflict and dogmatic socialism, Laos’ lack of foreign influences offers travelers an authentic glimpse of Southeast Asian culture, from the life on the Central Mekong with its colorful markets, the charming town of Luang Prabang to the long stretched rugged Annamite highlands.

Laos has a tropical climate with most of the year a temperature that is hot and humid, divided into two distinct seasons, the rainy season from May till the end of September, and the dry seasons from October through April. Annual temperatures fluctuate between 28 and 38 degrees Celsius. However, around January the temperatures in the capital city Vientiane can reach a minimum of 19 degrees Celsius, and mountain regions experience temperatures around 15 degrees Celsius, with in winter months and cold night possible freezing temperatures.

There are around 49 different ethnic groups in Laos, and with this many diversity one of the trademarks of Laos is shown; their art. The rich cultural heritage combined with religious art and architecture allows for a brilliant and distinctive way of creating artistic products that are shown in the architectural styles, ceramics, sculptures, paintings, statues and also the masks they wear during the Lao New Year. The people are frank, open, friendly and possess a strong sense of respect and courtesy, and with a greeting that is called the ‘Nop’, which looks like how people pray, they show respect to one another.The primary religion that is followed is Theravada Buddhism, which about 90% of the country’s inhabitants practices, and has a strong influence on the society.

The country Laos traces its history back to the kingdom of Lan Xang, “Million Elephants and White Parasols” founded in the 14th century, with the actual capital of Luang Prabang, with further developments around the 17th century, and finally became under French administration in 1893.

The local cuisine is distinctive from other Southeast Asian countries, where the staple food is sticky rice, which is eaten by using the hands. There is a saying that depicts the sticky rice as an essence of being Lao, which can be translated to “children or descendants of sticky rice”. The cuisine has many variations that depend on the fresh foods of the local regions. There is still some French influence in the cuisine, which can be seen in the baguettes that are sold on the streets, and the French restaurants.

Myanmar is a paradise to discover, go and experience the mystical charms of the East in all its diversity - rich archaeological sites, glittering pagodas, a wealth of cultures, colorful festivals and arts. Myanmar is also blessed with an awe-inspiring range of natural sights - idyllic landscape, lush fertile...