Quang Binh in the north of Central Vietnam has an abundance of alluring landscape filled with mountains, with its most attractive attraction of Phong Nha Ke Bang National Park, which spans over an area of around 850 square kilometers. Hundreds of astonishing caves varying in size and length, with the most impressive cave being Son Doong Cave that due to its massive entrance is the largest known cave entrance in the world, and marvelous underground river systems can be seen.

Phong Nha Ke Bang National Park is listed as a World Heritage Site by UNESCO and is beginning to be one of the top tourism destinations in Vietnam for its breathtaking nature and karst mountains, that are traced back 400 million years ago, making it the oldest karst region in Asia, and its large biodiversity.

Chay village is surrounded by mountains and rivers. The local people mainly make a living... 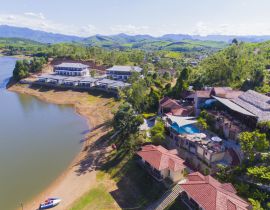 During your stay your every need will be catered for. The Lake House is run by a...

Things to do in Phong Nha - Ke Bang Area

Sightseeings Paradise Cave - limestone cave with a maximum height of 72 meters Phong Nha Cave – the most beautiful sandbank and reef, as well as for its most spectacular stalactites,...
More

Similar as some provinces in Central Vietnam such as Hue, Quang Nam, Quang Binh is also famous for Banh Bot Loc, Banh Beo, Bun Thit Nuong. Besides, there are two dishes which are only availabe...
More